To set up a system which is pneumatic based we need some basic components, which are necessary for the system, basically these components makes the whole system.

In this blog we are going to know about the important components used in a pneumatic system.

Following are some important components,

Intake filter is used to purify the air from atmosphere before it is compressed, at this stage all kind of dust and other impurity is separated from the air also moisture from the air is removed so that corrosion of component can be avoided. The symbol of intake filter is

Compressor is a device which compresses air to a higher pressure (in PSI or bar), it is a pump of rotary or reciprocating type. These devices are powered by electricity mostly, some are powered by gas also.

Regulators are the components which controls the flow of the compressed air, also it is used to supply the air at a particular pressure according to the need (it can reduce the pressure of compressed air).

While gauges are used to measure the flow and direction of flow. It can be mechanically or electronically operated, some of them are able to share the data with computer system, benefit is user can control the pressure accordingly.

It is a cylinder which contains the compressed air, most of the times it is attached with the compressor, it is the point from which the supply begins to the system via feed lines.

Special care is taken during manufacturing of this tank, it should not leak and also it should have a good pressure carrying capacity.

Hose pipes are used for supplying the compressed air to the components, selection of these pipes are done on basis of pressure to be transmitted and discharge rate of the pressure. 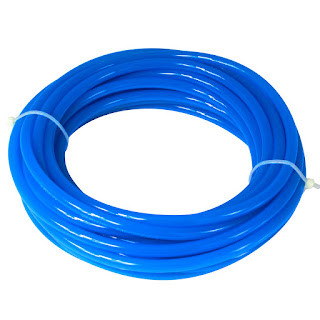 These are placed just before the actuators, the work of directional valve is to control the motion of actuators according to the signal given by the controller(electronically or mechanically), they do so by changing the direction of flow.

Actuators are the devices which perform the work in a pneumatic system, they perform the tasks according to the command given from the control unit. Actuators are controlled by controlling the flow and its direction.

Hierarchy of connections of Pneumatic System-

Supply Elements in a Pneumatic System